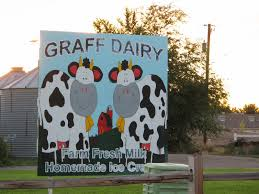 Daisies have been on the “Between Earth and Sky” journey for the better part of the year, so far. In this journey they have learned quite a bit about nature and America. Last week the Flower Friend characters in the story took a trip through Dairyland USA so we followed it up with a trip to our local dairy. Graff Dairy is a family owned business that has been in our town for 50 years. We were given a tour by Dave Nichols, who has been running the place for 38 years.

Graff Dairy owns 220 Holstein cows (kept on a farm 20 miles away). We learned they milk their cows every day, twice a day, at midnight and noon! Cows produce 10-15 gallons of milk a day but can not start producing milk until after they have had a calf. Each cow is milked for 9 months of the year and have a 3 month “vacation” each year while they are pregnant. So, 80% of the 220 are in production at any given time.

Graff Dairy feeds their cows “sweet feed” made from hay, oats, barley, corn and wheat. This makes their milk sweeter tasting than milk from dairies who feed their cows grass.

The process for getting the milk into bottles was pretty intense, but happened in a pretty small space and rather quickly. Graff produces 300 gallons of milk in an hour. They also make delicious ice cream every day. 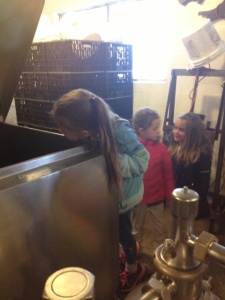 This is the holding tank where milk is put at the beggining of the process. The tank can hold 2000lbs of milk. In order for the girls to grasp how much that was we told them a whale could fit in the tank…they “got it” after that. The tank is refrigerated and has a large paddle in it to keep the milk temperature regulated and even.

We learned a little about pasteruization (named after its inventor, Louis Pasteur) and homogenizing milk.

Pasteurization is a process by which milk is heated to a temp of a MIMIMUM of 161 degrees but usually around 167 degrees and then cooling it down to slow the spoilage process caused by the germs that grow in the milk. We learned the ideal temperature for milk is 38 degrees because at 40.5 degrees the bacteria in the milk will double every hour!

Homogenization is the process by which cream/fat is incorporated into the skim milk. Basically the milk is “squished” with 1700lbs per square inch of pressure (photo above is Miss I. about to get “homogenized”…she was “squished from each direction to illustrate what happens inside the machine). Ice cream is homogenized at over 3000lbs per square inch of pressure. Some people prefer skim milk to whole milk because it is lower in fat, but we learned the naturally occuring vitamins in milk are in the cream. So, higher fat milks don’t need added vitamins.

After learning about how milk goes from the cow and into bottles, we also learned a little about how they have to keep their equipment immaculate! Milk can only contain 5parts of “dirt” to every 1M parts. To put it in perspective, tap water averages about 30 parts of dirt per million and expensive bottled water about 20 parts per million! When the dairy is spot checked by inspectors, if they are even at 6 parts per million, they have to dump the entire 2000lb batch! Dave, showed the girls that stainless steel is REALLY easy to see when it is clean or dirty because when you press your fingers to it, it will leave a finger print. Even more crazy, was we were told that finger print alone was too much dirt for his milk!! The cleaning process takes longer, in his 12 hour processing day, than bottling the milk does. He also runs a wash of chlorine through his machines again each morning before the milk arrives at 2:30am, to make sure any dirt from the day before after the wash, isn’t in the machines! 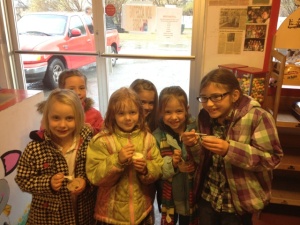 The girls got a “pup cup” (small sample cup, often given to visiting pets) of their choice of ice cream flavors that day! Graff Dairy is pretty well-known locally for its amazing ice cream. The hour we were on our tour, there was a constant stream of cars at their drive up window of people ordering yummy treats….even on this COLD and rainy day!

While we would have liked to take a photo of the girls in front of the dairy’s sign, it was raining and about 35degrees out…so the photo above was taken off the web. It is a cute sign and a photo we would have loved to have! We would like to extend a HUGE thank you to Dave and the staff at Graff for their time and shared information!

Today is Veteran’s Day. Troop 2214 would like to extend gratitude to all those who currently serve our country in the Armed Forces, those who have served in the past and all those who gave the ultimate sacrifice while serving to preserve and protect our great nation!!

On Saturday, our small town held it’s annual Veteran’s Day Parade in downtown on Main Street. For the 3rd year in a row our troop marched in the parade to show our respect and honor all those who serve(d). It is always a treat to see retired men and women still fitting in their military uniforms and proudly waving the colors.

This year we got to march right behind one of the local high school bands, so we had fun music to march to! The photo above is during warm-up, right before the parade started. The photo below is during the parade. The girls loved it! 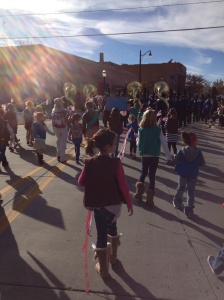 Brownies visited one of the local pediatric practices in town, thanks to the assistance of Dr. Katie Price, who happens to also be a mom from our school. This visit helped the Brownies fulfill their My Best Self badge, which they began a couple of weeks ago. 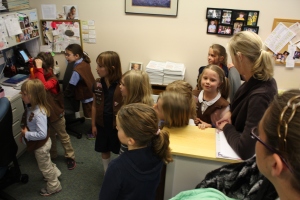 First Dr. Price talked to us about how to stay healthy, how to talk to our parents about being sick, and some important health rules and practices so we can be our best selves. Then, she showed us around the office – we got to see how closely doctors work together so they can collaborate on patients and hang out in an exam room.

We also got to watch Dr. Rich Price put a cast on his daughter (and our friend) and then they cut it right back off again. The cast saw was loud! Our tour ended in the office conference room where Dr. Katie Price and her staff had put together “doctor” kits for us with some fun toys.

We had a lot of fun, learned a lot about the physical part of being our best selves, and we may even have some future doctors out of this group after this visit!