SPECIAL thanks to Principal, Mr. Aubert, since the troop now has a nice plot of land to plant a garden! The Juniors have been working on planning, cleaning and learning about flowers in preparation for the garden. This garden project fulfills some of their work towards earning both the Gardening and Flowers badges. Each Junior has been partnered, as a “Junior Buddy”, with a Daisy in the troop to also help the Daisies in working on their Take Action project for their “Welcome to the Daisy Flower Garden” Journey, this year.

This week the girls were visited by Mona, from Bookcliff Gardens, to learn a bit more. 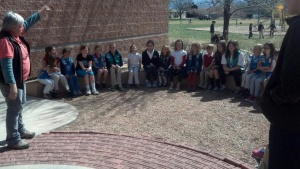 Thank you so much, Mona! 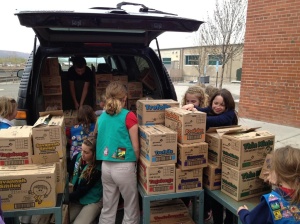 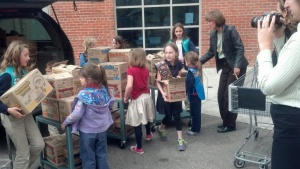 Yesterday about 1/3 of our troop was able to take a trip down to Catholic Outreach to deliver over 500 boxes of cookies collected through donations during this year’s Girl Scout Cookie selling season. Our troop collected donations for over 600 boxes total, with some being donated to community members who helped us during our selling season, some sent by individual girls to troops overseas and the majority being donated to Catholic Outreach. Catholic Outreach was voted by our troop as our local Hometown Hero after the Daisies took a field trip to the shelter in December, while working on their “Making Choices” leaf patch.

When we arrived to start unloading boxes, camera crews from KKCO, KJCT and KREX were on hand to film us because this was the largest donation to charity by any troop on the Western Slope! Way to go girls (and parents)!!! 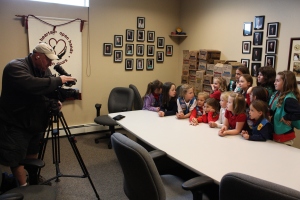 This excerpt is from the news release issued by the Fund Development Manager of our Girl Scout Council “Each year, Girl Scouts adopt Hometown Heroes during the Girl Scout Cookie Program. These Hometown Heroes can be non-profit organizations, food banks, or military and uniformed personnel, to name a few examples. Troop 12214 chose Catholic Outreach to receive their Hometown Hero cookie donations after the troop’s members visited the shelter in December to learn about the services they provide to those in our community who are in need. This visit was part of the Daisies’ work to earn the “Making Choices” Girl Scout Patch. Catholic Outreach is a local non-profit whose mission aligns both with Holy Family Catholic School and Troop 12214, so it was a natural choice!” 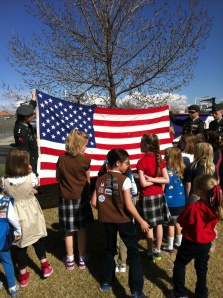 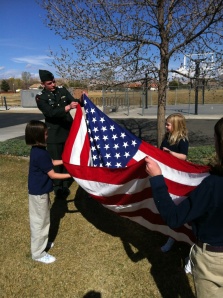 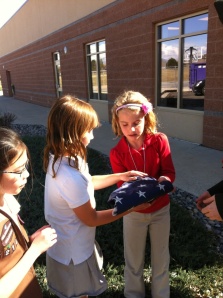 Thank you to the Central High School JROTC for coming out and doing a presentation on how to properly fold a flag. Our troop very much enjoyed the demonstration and history. We especially loved getting to learn how to fold and show reverance. Brownies have now completed the Celebrating Community badge!

Juniors got to have a really fun trip to one of the local news stations. They stood in front of the green screen and tried to “read” the weather, while trying to remember to point in the opposite direction of where they thought the map was showing them! They toured the station and sat in the audience while the anchors read the news, live and on the air!

Brownies, with Daisies along for the ride, visited the Museum of the West as one step towards completing their Celebrating Community legacy badge. They learned about Conquistadors coming to the west and briging horses. The Ute Indians adopted the use of horses after this. They also got to “fly” in a small plane, sit in a stage coach, check out a turn of the century (20th) fire engine, tour a replica of a Uranium mine and sit in an OLD classroom! One other favorite hit was the old phone booth (anyone remember those??!!??) 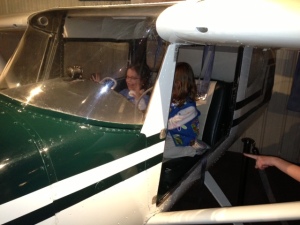 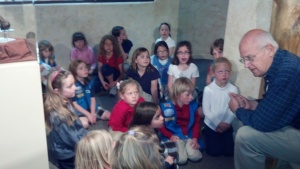 Thinking Day is an annual event held by our Service Unit. Each participating troop picks a country and spends time creating a display about it, including facts about their Girl Scouts/Guides, samples of food and fun SWAPS (Special Whatchamacallit Adoringly Pinned Somewhere). Our troop is a multi-level and is HUGE, 40 girls, so this year we decided it was easier for each level to do their own display. We kept all 3 displays in the same region of the earth, so they kind of tied together. Daisies did a fantastic display for MEXICO, Brownies did EL SALVADOR and Juniors rounded it out with a very full display of GUATEMALA.

SWAPS – Mexico was a maraca made from a wooden bead and golf tee. El Salvador was a friendship knot tied with ribbon in the colors of the country’s flag, Guatemala was a tamale.

* A couple of girls started the year with our troop were adopted from Guatemala so we are VERY thankful they were still willing to share all of their memorabilia for our display.